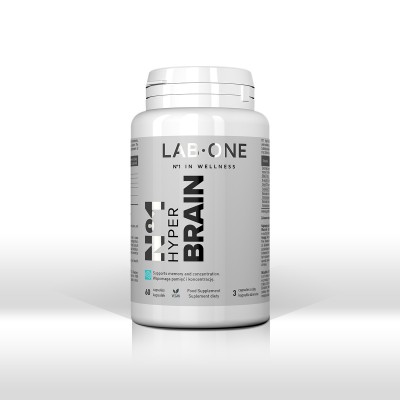 N°1 Hyper BRAIN is a dietary supplement with a unique composition of ingredients, aimed at improving cognitive function and supporting the nervous system. Substances contained in the product have a beneficial effect on improving memory, concentration and learning ability.

The formula of N°1 Hyper BRAIN is based on nootropic action, i.e. increasing the level of neurotransmitters.

Nootropics are substances that primarily improve brain function and performance. They enhance cognitive function, concentration and memory, as well as motivation and creativity. The term was formed by combining the Greek words νους (nous, reason) and τρέπειν (trepein, "to bend" or "to twist"). Natural nootropic substances, have been known for years in the traditions of ancient cultures. Today, science is studying and explaining how these compounds work.

Effect of the active ingredients contained in N°1 Hyper BRAIN:

Lion's mane mushroom - a species of fungus belonging to the family of Hericiaceae called Yamabushitake or Lion's Mane because of its appearance resembling a lion's mane. In countries of the Far East, especially Japan and China, soplolly has been known for centuries and used in both cooking and traditional medicine. It belongs to the group of adaptogens, which are natural substances that increase the body's resistance to stress or fatigue. In addition, it exhibits neuroprotective effects, accelerating the recovery of nerve cells and aiding in the regeneration of brain regions responsible for memories and emotions. This mushroom also exhibits nootropic effects, stimulating the production of the myelin sheath of nerve cells. It is a protective layer located around the axon of a neuron that is extremely important for the proper functioning of the nervous system.

N-acetyl-L-tyrosine - This is an extremely effective form of tyrosine for the purpose of increasing the production of dopamine, a neurotransmitter associated with feelings of pleasure, a motor for action, and inspiration.  It is classified as a nootropic substance. Supports bodily function for motivation, well-being, and focused goal-oriented performance.

MCT oil powder - medium chain fatty acids, hence the origin of its name - MCT (Medium Chain Triglycerides). Due to their unique structure and nootropic properties, they positively affect the body in many ways, including supporting cognitive function.

Cyticoline (CDP-choline) - This unique and highly bioavailable form of choline makes the mind more receptive in a short period of time. It is a nootropic that works both alone and synergistically with other such substances. It is a naturally occurring, endogenous precursor of phosphatidylcholine, the basic building block of cell membrane phospholipids. It also exhibits neuroprotective effects. CDP-choline enables you to perform tasks correctly and improves your memory.

Green tea leaf extract standardised to 98% L-theanine - an amino acid contained in green tea, whose positive properties have been known and highly valued for a long time. It is found in the leaves and is the main ingredient responsible for its unique flavour. Theanine is a nootropic substance that causes stimulation of alpha waves in our brain, responsible for a better mood and putting us in a calm and focused state.

Bacopa monnieri extract 4:1 - otherwise known as brahmi. It is a plant used for thousands of years in the traditional Indian medicine - Ayurveda. It is classified as an adaptogen and a nootropic. Bacopa contains active ingredients that improve memory processes and thus learning. Due to these abilities, it can be successfully used as a panacea for problems related to the central nervous system and its proper functioning.

There is no reference value for consumption

There is no reference value for consumption.

Note: Dietary supplement intended for adults. Do not exceed the recommended daily allowance. Do not use in case of hypersensitivity or allergy to any of the preparation ingredients. Allergens are highlighted in the ingredients list by underlining. Consult your doctor if you are pregnant, breastfeeding, taking medication or have a medical condition. Food supplements should not be used as a substitute (replacement) for a varied diet. A balanced diet and healthy lifestyle are important for maintaining good health.

Storage conditions: Store at room temperature, in a dry place, out of the reach of children.

4. Can N°1 Hyper BRAIN be used by vegans?
Yes. The formula contains only natural plant ingredients, so the product can be taken by vegans and vegetarians.

We are waiting for the delivery

At the moment, we are out of stock for the selected product.

Notify me about the product availability

You will be notified by e-mail as soon as the product is in stock.